1 The allotment for Joseph began at the Jordan, east of the springs of Jericho, and went up from there through the desert into the hill country of Bethel. 2 It went on from Bethel (that is, Luz), crossed over to the territory of the Arkites in Ataroth, 3 descended westward to the territory of the Japhletites as far as the region of Lower Beth Horon and on to Gezer, ending at the Mediterranean Sea.

4 So Manasseh and Ephraim, the descendants of Joseph, received their inheritance.

5 This was the territory of Ephraim, according to its clans:

The boundary of their inheritance went from Ataroth Addar in the east to Upper Beth Horon 6 and continued to the Mediterranean Sea. From Mikmethath on the north it curved eastward to Taanath Shiloh, passing by it to Janoah on the east. 7 Then it went down from Janoah to Ataroth and Naarah, touched Jericho and came out at the Jordan. 8 From Tappuah the border went west to the Kanah Ravine and ended at the Mediterranean Sea. This was the inheritance of the tribe of the Ephraimites, according to its clans. 9 It also included all the towns and their villages that were set aside for the Ephraimites within the inheritance of the Manassites.

1 This was the allotment for the tribe of Manasseh as Joseph’s firstborn, that is, for Makir,Manasseh’s firstborn. Makir was the ancestor of the Gileadites, who had received Gilead and Bashan because the Makirites were great soldiers. 2 So this allotment was for the rest of the people of Manasseh—the clans of Abiezer, Helek, Asriel, Shechem, Hepher and Shemida. These are the other male descendants of Manasseh son of Joseph by their clans.

3 Now Zelophehad son of Hepher, the son of Gilead, the son of Makir, the son of Manasseh, had no sons but only daughters, whose names were Mahlah, Noah, Hoglah, Milkah and Tirzah. 4 They went to Eleazar the priest, Joshua son of Nun, and the leaders and said, “The Lord commanded Moses to give us an inheritance among our relatives.” So Joshua gave them an inheritance along with the brothers of their father, according to the Lord’s command. 5 Manasseh’s share consisted of ten tracts of land besides Gilead and Bashan east of the Jordan, 6 because the daughters of the tribe of Manasseh received an inheritance among the sons. The land of Gilead belonged to the rest of the descendants of Manasseh.

11 Within Issachar and Asher, Manasseh also had Beth Shan, Ibleam and the people of Dor, Endor,Taanach and Megiddo, together with their surrounding settlements (the third in the list is Naphoth).

12 Yet the Manassites were not able to occupy these towns, for the Canaanites were determined to live in that region. 13 However, when the Israelites grew stronger, they subjected the Canaanites to forced labor but did not drive them out completely.

14 The people of Joseph said to Joshua, “Why have you given us only one allotment and one portion for an inheritance? We are a numerous people, and the Lord has blessed us abundantly.”

15 “If you are so numerous,” Joshua answered, “and if the hill country of Ephraim is too small for you, go up into the forest and clear land for yourselves there in the land of the Perizzites and Rephaites.”

16 The people of Joseph replied, “The hill country is not enough for us, and all the Canaanites who live in the plain have chariots fitted with iron, both those in Beth Shan and its settlements and those in the Valley of Jezreel.”

17 But Joshua said to the tribes of Joseph—to Ephraim and Manasseh—“You are numerous and very powerful. You will have not only one allotment 18 but the forested hill country as well. Clear it, and its farthest limits will be yours; though the Canaanites have chariots fitted with iron and though they are strong, you can drive them out.”

A map of the approximate land each tribe was allotted: 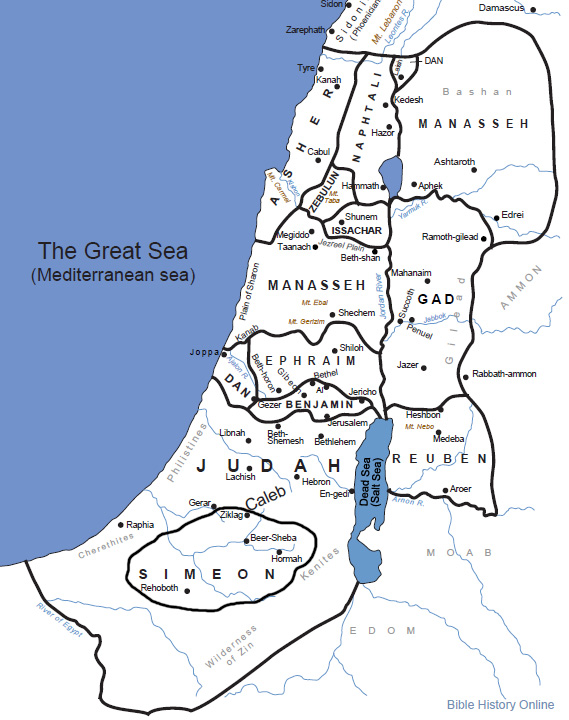 The land is now being given to the tribe of Joseph who had 2 sons, Ephraim & Manasseh.  Half of the tribe of Manasseh has already received their inheritance, because they took the land, and asked for God’s graciousness on the other side of the Jordan under Moses’ leadership, prior to all of the wars under Joshua.

Numbers 27 recalls the daughters of Zelophehad, a descendant of Joseph (who had no sons), asking for land as an inheritance because they had no male to lead their family.  The Lord graciously gives an order that they shall indeed inherit part of the Promised Land, and then a law is set in place for handling these types of matters.  Because of their inheritance, the apportioned land is larger than others for the clan of Manasseh.

Even so, Ephraim and Manasseh are not satisfied with their allotment.  They desire more land.  Joshua graciously tells them to go up into the forests of their allotted lands and take it from the Canaanites.  When they complain about the inhabitants being too strong, Joshua rebukes them.  He explains that the land has been allotted, and that it is their duty, as God has commanded them, to take the land.

Special note is given in these passages to the fact that the Israelites neglected (yet again) to drive out all the inhabitants of the land they were inheriting.  Because of this, those people became slaves and workers in the land, but later we see the true issue with allowing these people to stay: Israel turns her attention from God to the false gods of the Canaanites.

When God gives us an inheritance, we are to be bold to take it.  This is true of our walk as Christians.  We should not be sitting idly by, knowing we are saved, and going about our lives in the same way as before.  We are called to be different.

“7 Dear children, do not let anyone lead you astray. The one who does what is right is righteous, just as He is righteous. 8 The one who does what is sinful is of the devil, because the devil has been sinning from the beginning. The reason the Son of God appeared was to destroy the devil’s work. 9 No one who is born of God will continue to sin, because God’s seed remains in them; they cannot go on sinning, because they have been born of God. 10 This is how we know who the children of God are and who the children of the devil are: Anyone who does not do what is right is not God’s child, nor is anyone who does not love their brother and sister.” – 1 John 3

The examples in this passage are the daughters of Zelophehad.  It had been approximately 40 years or so since they received a promise from God that they would inherit a portion of the Promised Land.  They did not come forward forcefully, expecting something more than what was promised.  They came forward to collect what was rightfully theirs, and it was honored.  We, too, should live in expectation of the promise that awaits us: eternal life with Christ.

“24 As for you, see that what you have heard from the beginning remains in you. If it does, you also will remain in the Son and in the Father. 25 And this is what he promised us—eternal life.” – 1 John 2

What attitude do you have when you think of what you have?  Do you remember that this life is just a passing moment, or do you try to hold on to each second as if it were all you had?  As Christians, we are called to look past the pain, suffering, and even joys in this life to something that has eternal value: Christ.  Can you keep your eyes on Him through your trial… or even through your happiest times?

When God gives us a promise, eternal life through His Son, that does not guarantee a life full of riches and fame (or extra land).  Each person has their own role to play in what God is doing on this earth.  Whatever your lot, do not look at God and think that He will give you what you want because you ‘deserve’ it.  We, being sinners, deserve nothing except eternal punishment.  It is only by His grace and mercy that we are able to have this hope in a future with Him.  We are called to become ever increasingly like our Savior, removing the things of the flesh, and putting on the things of righteousness.  This earthy stuff does not matter.

“17 So I tell you this, and insist on it in the Lord, that you must no longer live as the Gentiles do, in the futility of their thinking. 18 They are darkened in their understanding and separated from the life of God because of the ignorance that is in them due to the hardening of their hearts. 19 Having lost all sensitivity, they have given themselves over to sensuality so as to indulge in every kind of impurity, and they are full of greed.

20 That, however, is not the way of life you learned 21 when you heard about Christ and were taught in him in accordance with the truth that is in Jesus. 22 You were taught, with regard to your former way of life, to put off your old self, which is being corrupted by its deceitful desires; 23 to be made new in the attitude of your minds; 24 and to put on the new self, created to be like God in true righteousness and holiness.” – Ephesians 4

Oh Lord, thank you for the work you are doing in my life, and those around me.  I pray that you would open the eyes of those who look to you as provider, and show them that you are so much more.  You are our Savior, our Sustainer and Giver of Life.  Let all bow down to you because you have graciously given us all we will ever need: your Son.

This site uses Akismet to reduce spam. Learn how your comment data is processed.

Oh! My Awesome God is an online commentary and advocate for the work of Jesus Christ. We believe that the Bible, in its entirety, is divine revelation, and we submit to the authority of Holy Scripture, acknowledging it to be inerrantly inspired by God and carrying the full weight of His authority. We believe in justification by faith alone as the article on which the church stands or falls, and we are never to compromise on this essential truth of the Christian faith. Please feel free to share these notes with others as the goal of this writing is for God's glory, not ours. If you wish to use a graphic, please contact us, and we will send a full resolution image.